The Sisters Grimm Wiki
Register
Don't have an account?
Sign In
Advertisement
in: Books (real-world), Summary, Real-world,
and 2 more

The Fairy-Tale Detectives is the first book of the Sisters Grimm series by Michael Buckley. In book one of this best selling series, sisters Sabrina and Daphne are sent to live with their mysterious grandmother, Relda Grimm. The sisters learn they are descendants of the Brothers Grimm, whose famous book of fairy tales is actually a collection of case files. The girls are the latest in a long line of fairy-tale detectives, and their new hometown is filled withEverafters (as magical folks like to be called)—some good and some very, very bad. When a mysterious Everafter sets a giant loose on the town, it’s up to the Sisters Grimm to save the day.

"We are Grimms and this is what we do"

For Sabrina and Daphne Grimm, life hasn't been a fairy-tale. After the mysterious disappearance of their parents, the sisters are sent to live with their grandmother - a woman they believed was dead! Granny Relda that the girls have two famous ancestors, the Brothers Grimm, whose classic book of fairy-tales is actually a history book that documents magical mischief. Now the girls must take on the family responsibility of being fairy-tale detectives. Their first case? A roller-coaster ride of an adventure to stop a giant from destroying their new home town.

"In memory of my grandparents, Basil and Relda Gandee"

"I'd like to thank my editor, Susan Van Metre at Amulet Books, who's guidance helped me find the book inside my idea; my agent, Alison Fargis of the Stonesong Press, for taking a chance on me; Joseph Deasy, who was honest enough to tell me when my writing stunk; my love, Alison, for telling me when Joe was wrong; Jonathan Flom, for all his support over the years; Joe Harris, for being a good friend; my parents, Michael and Wilma, for filling our house with books even if the checking account was empty; and Daisy, who was patient when I was too busy writing to take her for a walk."

Disclaimer
All rights and excerpts belong solely to Michael Buckley - The Wiki does not own anything to do with The Sisters Grimm. All artwork from the books are owned by Peter Ferguson; the Wiki doesn't hold any claim to these either.

“The two girls looked up into the horrible face above them and felt hot breath blow through their hair.”
~ Prologue, from The Fairy-Tale Detectives

The series begins with a train bound to Ferryport Landing carrying Sabrina and Daphne Grimm and their case-worker, Minerva Smirt. Although Sabrina has serious doubts about the legitimacy of the grandmother the two sisters are being sent to live with, Ms. Smirt shoots down her protestations, remarking that there aren't any more foster families willing to take on the two 'troublesome' girls.

The two sisters meet Relda Grimm and Mr. Canis who take them home, where they meet Elvis, the family dog. Sabrina angrily confronts Relda, calling her an 'impostor' and remains deeply suspicious of her. Following an unsuccessful escape attempt, Relda takes the two sisters along to  'investigate a crime', involving a destroyed farmhouse.  Whilst looking for clues at the farm, Sabrina and Daphne meet Mayor Charming and his assistant, Mr. Seven. Relda finds a leaf at the destroyed site and claims it has come from a giant's beanstalk, leading Sabrina to conclude that her guardian is crazy.

A confused Sabrina and Daphne are further baffled by Relda's revelation that they are descended from the Brothers Grimm and so are part of a family legacy of fairy-tale detectives. Relda also tells them that fairy-tale creatures  - called Everafters -  exist as all fairy-tales are true and a lot of the Everafters reside in Ferryport Landing. She also reveals that there is a barrier separating the Everafters from humans; this prevents them from leaving the town, along with at least one member of the Grimm family (or else the barrier would fall). Sabrina dismisses her as a lunatic.

The next day, Relda reviews the clues from their findings. They go to Ferryport Landing Memorial Hospital to visit Thomas Applebee (the farmer whose farm was destroyed) and find out that him and his wife had been approached by a British man who wanted to buy their land. This leads Sabrina to believe that Charming is the British man whom they were referring to, due to Charming's British accent. On their way home, Relda continues to explain Everafters to the girls but is interrupted by Sabrina's angry insistence that she doesn't believe any of the 'fairy-tale nonsense'. She drags Daphne out of the car and continues to rant - however, her tirade is stopped by a giant hand reaching down and taking the car, kidnapping Relda and Canis.

Officer Hamstead arrives to escort the girls to safety. As the girls begin to think that they are safe, Charming's voice blares out of the police radio with orders that Hamstead should bring the two sisters to his mansion. Daphne and Sabrina escape from the car and are saved from Hamstead by little floating lights. The lights lead Sabrina and Daphne deeper into the forest, where they find a junk throne upon which sits a dirty, crowned boy. After a series of mishaps, he introduces himself as Puck, from A Midsummer Night's Dream. He agrees to help the girls and so they return home and begin to research giants. In the process, they also find out more about Charming and discover that he is trying to rebuild his kingdom in Ferryport Landing. This adds to Sabrina's theory that Englishman and Charming are the same person and Charming wants to use the giants to help him own all of Ferryport.

As they look through the books, they find a letter from Granny Relda which tells them to go to a room in the house that she had previously forbidden them from entering. Inside the room, they find a simple, full length mirror. Disappointed, they move to leave; however, a bellowing voice stops them. After a brief altercation involving flames and death threats, Daphne identifies the voice as belonging to Mirror, the magic mirror from the tale of Snow White. He informs them that Relda and Canis are still alive and tells them that they need the help of the imprisoned Jack the Giant Killer.

Sabrina and Daphne fly to Ferryport Landing Jail using the magic carpet, where they meet Jack. He agrees to help them but only if they bust him out of jail. They eventually manage to escape with him and Jack comes up with a plan to sneak into Charming's office during the Ferryport Landing Ball. They go to Mirror in order to get disguises, using the Fairy Godmother's Wand to transform themselves into two Everafters - Momma Bear for Sabrina and the Tin Woodsman for Daphne.

Using Dorothy's Slippers to go Charming's mansion, Sabrina and Daphne enter the line of Everafters waiting to enter and are stunned to learn that their parents may not have abandoned them and were actually kidnapped. The sisters are also shocked by how strongly many Everafters hate their family for trapping them in Ferryport Landing, and also how many Everafters want them dead. Sabrina eventually manages to break into Charming's office and finds evidence that links the Mayor to the giant; she is interrupted, however, by Charming hauling a disguised Daphne into his office. After their disguises wear off, a livid Charming laughs off Sabrina's accusations that he kidnapped Relda and Mr. Canis. His explanation is interrupted by the arrival of the giant at the Mayoral mansion. Charming summons The Three to deal with the giant, but the giant still manages to wreak havoc on the mansion, tearing off a massive hole in the roof and bellowing that he smells the blood of an Englishman. The terrified Everafters flee the ball and an angered Charming yells that the Englishman is not here, confusing Sabrina and Daphne.

The giant runs away and both Charming and Sabrina furiously confront each other, with Charming blaming Sabrina for the failure of his ball and Sabrina blaming Charming for letting the giant get away and for not saving her grandmother and Mr. Canis when he had the chance. Charming then prompts Sabrina to use Dorothy's slippers to get to the Grimm House as he starts to explain to the Grimm sisters that Jack is actually behind the giant's release.

After arriving at the now vandalised house, Charming drags the two Grimms through the magic mirror only to find Elvis and Mirror himself battered and bruised. Mirror regretfully informs them that Jack had stolen the magic beans that grow giant beanstalks, and that he intended to grow the beanstalks to bring all the giants down into the town so he could kill them. The Grimm sisters and Charming retrieve Excalibur and, using Dorothy's Slippers, arrive at Widow's Peak. There they find a maddened Jack provoking the giant so he is 'more fun to kill'. Sabrina is aghast at the red hand print on Jack's shirt, similar to the one left behind on her parents' car from which they were taken. Jack denies kidnapping Henry and Veronica but confirms that he is a part of the Scarlet Hand. Whilst Charming tries to protect the girls from Jack's onslaught of arrows, Jack's true motives become clear: he wants to kill the giant and attain his former glory of being a renowned Giant Killer.

The angered giant eventually starts to chase Sabrina and Daphne through the woods and almost succeeds in capturing the two girls; just before he can grab the sisters, a panicked Sabrina wields Excalibur and unintentionally kills the giant. Jack approaches the scene and is furious to find that Sabrina 'robbed' him of his chance to attain his former glory. Hell-bent on becoming famous once again, he madly announces that he will attain his glory through another method - by killing the Grimms - so the barrier can fall. Just before he can attack Sabrina and Daphne, he is stopped by Mr. Canis, who is revealed to be the Big Bad Wolf. After a brief fight, Jack is defeated and Sabrina and Daphne are reunited with their grandmother. Sabrina apologises to Relda and the family go back home.

Once home, Relda takes Sabrina and Daphne to Mirror's room and asks Mirror to show them their parents. The sisters are stunned to see that their parents had not abandoned them but had been kidnapped, and are in a deep, enchanted sleep. The emotional moment is disrupted by a ruckus from downstairs; when they go downstairs to investigate, they find Puck moving into the Grimm family home, much to Sabrina's horror. 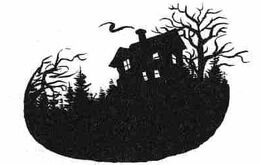 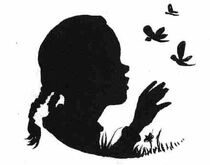 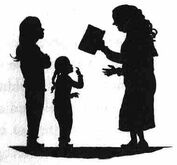 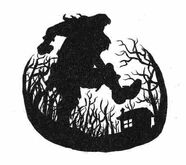 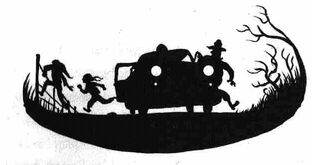 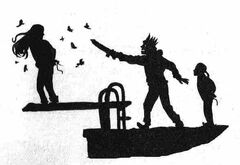 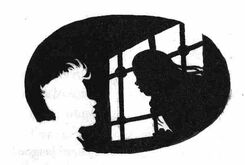 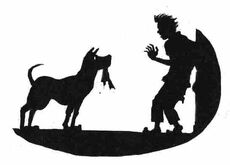 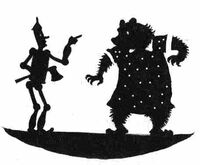 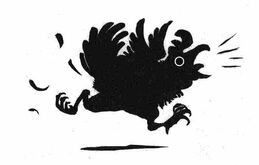 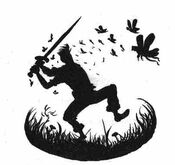 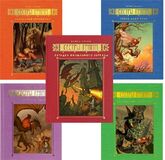