The Scarecrow is the "brainless" character from L. Frank Baum's tales of Oz. He is the librarian at Ferryport Landing Library. He is very smart, but he is also extremely clumsy, and he generally causes more harm than good when he tries to help visitors to the library find information. His actions usually result in bookshelves falling over.

He was quite insulted when Puck suggested that the brain Oz gave him was secondhand, not new.

“"Actually, I'm the Scarecrow, accomplished thinker, former Emperor of Oz, and head librarian of the Mid-Hudson Public Library." Puck eyed the man closely.
"But you're made out of hay, right?"
"Yes, and a brain. The great and terrible Oz gave it to me before he flew away in his balloon."
"Someone gave you a brain?" Puck asked. "I'm actually jeal ous. Whose was it before you got it?"
"I'm not sure what you mean," Scarecrow stammered.
The brain! Oz had to have gotten it somewhere. I bet it was a deranged killer's. Those are the easiest to get."
The Scarecrow stifled a scream. "My brain was brand new!"
"As if!" Puck said. "I know Oz and he never bought anything that wasn't on sale. I'm sure your brain is secondhand."
The Scarecrow looked as if he might have a nervous breakdown.”
~ Puck and the Scarecrow, from Tales from the Hood 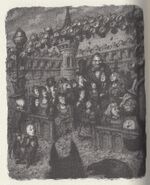