“My name is Relda Grimm. I am the wife of Basil Grimm. The mother of Henry and Jacob Grimm and mother-in-law of Veronica Grimm. I'm the grandmother of Sabrina and Daphne, and adopted grandma to Puck. I am also the grandmother of the little boy Mirror has kidnapped...you should know one more thing about me - I will do anything to protect my family. I don't care what falls apart. I don't care if the whole world falls apart.”
~ Relda Grimm, from The Inside Story

Relda Grimm, affectionately called "Granny Relda" by her granddaughters, was the head of the Grimm family since Basil Grimm's death. Michael Buckley describes the old woman as the "one constant" in the series and in the Grimm family: the "pillar of strength." Granny Relda is from Germany and has a light accent. She is the mother of Jacob and Henry Grimm, the latter being the father of Sabrina, Daphne, and Basil the Second.

At 26, Relda met Basil Grimm at a party in Berlin, Germany. They fell in love quickly, marrying a week later. The newlyweds then took a two year long honeymoon, vacationing all over the world, where Relda picked up her exotic recipes. One year into their prolonged vacation, Relda became pregnant with Sabrina's father, but the couple continued to travel. Finally, When Basil's brother Edwin died, Basil's sister sent a letter to Basil telling him that he must return to Ferryport Landing. At that time, Relda did not know the truth of Everafters or even the Grimm family, only that the famous Brothers Grimm wrote fairy tales. Moving into Ferryport Landing, Relda took up the family business and had two sons, Henry and Jacob. At some point after having her two sons, she welcomed into her family Mr. Canis, a distressed human containing the spirit of the Big Bad Wolf, despite the disapproval of Basil.

When her sons were nearly grown, disaster struck. Mischevious Jacob Grimm temporarily shut off the Barrier, unknowingly unleashing one of the most dangerous creatures in Ferryport Landing: the Jabberwocky. Basil Grimm was killed, and right after the funeral both of her sons left town. ﻿

It should be made known that during her time in Germany, she became infamous for her bad driving with the police. They threatened to hang her next time she drove a car in Berlin. Therefore, Mr. Canis usually drives the family car, though in book two Relda drives the car as they're chased by Bella. All of the Grimms, and including Mr. Canis, are unnerved by her driving and immediately tell her to never, ever drive again.

Jake Grimm described his mother as "good-natured" yet "impulsive". Relda always remained positive despite the things she's been through in life, such as the death of her husband and the drama created by living in Ferrypoint Landing. She was a loving woman and looked for and almost always found the good in people. She believed strongly in giving people a second chance. A good example of this was inviting notorious people into her family: Puck, Red, and Mr. Canis. She loved detective work and was very encouraging. Relda would do anything to keep her family safe, even let herself be possessed by Mirror.

Relda was an old woman with wrinkles and gray hair that still had some streaks of red, hinting at its former colour. Although she was elderly, she had red cheeks and shining green eyes that made her look much younger. Her outfits varied, but she always had a hat with a sunflower applique on it and were always bright and happy. She had a tendency to wear dresses in gaudy colours, often with a matching hat that usually had some kind of applique on it. (Such as when she wore a hat with a sunflower applique on it).

Relda was the wife of the late Basil Grimm Sr. and later became his widow after the latter died. She met Basil Sr. in Germany at the age of 26, at a house-party which the two attended. A week later, the two got married and spent the next year back-packing across the world as an extended honeymoon, the later were called to Ferryport Landing.

Relda was the mother to Henry Grimm, nicknamed Hank, the father of Daphne and Sabrina Grimm.

Relda was the mother to Jacob Grimm, nicknamed Jake.

Relda was the mother-in-law to Veronica Grimm, who married her son, Henry Grimm.

By the second book, Sabrina had established a relationship with her grandmother and was helping her grandmother with detective work, albeit reluctantly. Her grandmother wasn't too pleased with her prejudiced nature towads Everafters, which led to a small rift between the two, though this was quickly resolved by the end of The Unusual Suspects, when Sabrina realized her mistake. There was also some tension evident in books 3 and 4, where, in The Problem Child, Sabrina had to cope with her addiction to magic which her grandmother heartily disapproved of, and in Once Upon a Crime, where Sabrina wanted to give up her role as fairy-tale detective. By Magic and Other Misdemeanors, however, Sabrina and Relda seem to have a good relationship, with the latter being praised by her grandmother for succesfully passing her training.

Their relationship again hits the rocks in Tales from the Hood, where Relda is disappointed with Sabrina's lack of faith in Mr. Canis. By the end of the book, again Sabrina realizes her mistake, so their relationship again recovers. The two share a good relationship in The Everafter War, with Relda crying when Daphne and Sabrina are about to go back to New York. In The Inside Story, Sabrina vows to rescue her grandmother after Mirror possesses her body, and she and the rest of her family spend the entirety of the Council of Mirrors trying to defeat the Master and get Relda back.

By the first epilogue, Relda had passed away so she doesn't get to see Sabrina's almost wedding. Sabrina expresses a desire for her grandmother's presence, to which her father replies that she is watching from heaven, probably serving Grandpa Basil a weird squid and daffodil dish.

Relda was the grandmother to Daphne Grimm. Daphne was very trusting and open when she met Granny, chowing down on her chocolate chip cookies and persuading Sabrina to stay at Granny's house despite the fact that the former thought the latter was a fraud and a possible murderer.

"If you go after him they will arrest you next. Stay with us, Puck. I can't bear to lose another member of my family." Relda to Puck, after Canis gets sentenced to death.

Relda's relationship with Puck is that of Grandmother to Grandson, more so as the series goes on. She cares dearly for Puck, inviting him to live with her at the end of the first book. She considers him an adopted member of the Grimm family, and he accepts that graciously, even though he doesn't particularly show it. Before he moved in with the Grimms, Relda would often invite him around for dinner, or leave food out for him to eat, therefore showing how much she cared for him even before he became a member of the Grimm family. She is indulgent with Puck and treats him as she treats her other two (later three) grandchildren, not really acknowledging his Royal status, instead choosing to treat him equally, which he seems to appreciate, although he makes a show of pretending he doesn't. Relda also seems to have a high tolerance of Puck's antics, more often than not managing to excuse Puck's behaviour or over-look, or not get too angry. Puck always refers to her as "Old Lady." She thinks of Puck as her adopted grandson, though the two later become family (though Relda has passed away at this point) through Puck's marriage to Sabrina. 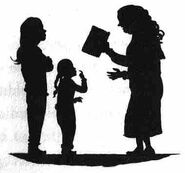 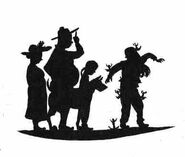