The Sisters Grimm Wiki
Register
Don't have an account?
Sign In
Advertisement
in: Characters, Deceased, Everafters,
and 5 more

The Queen of Hearts is an Everafter from the fairy tale Alice's Adventures in Wonderland by Lewis Carroll. She was mayor of Ferryport Landing, succeeding Prince Charming, and a loyal member of the Scarlet Hand.

She is often found with an electronic megaphone in her hand which she uses liberally, much to the annoyance of other characters.

She is described as wearing such an absurd amount of makeup that it makes her look like "a demented beauty pageant contestant."

When she moved into the mayor's mansion, she redecorated the place in a very gaudy fashion. At one point Sabrina sees a marble statue that is noted as "substantially thinner and more attractive than the real person."

As in the book by Lewis Carroll, she often threatens beheadings when she is upset.

Later, in the Council of Mirrors, she dies when Jake betrays her and lets her die with Nottingham. 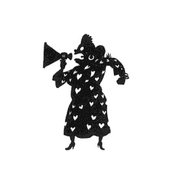 The Council of Mirrors
Community content is available under CC-BY-SA unless otherwise noted.
Advertisement