The Sisters Grimm Wiki
Register
Don't have an account?
Sign In
Advertisement
in: Characters, Everafters, Scarlet Hand,
and 4 more

Pinocchio is the famous puppet boy of The Adventures of Pinocchio. In the Sisters Grimm series he is the only Everafter that is incapable of aging.

He was originally carved out of wood by Geppetto.

He arrives at Fort Charming in "The Everafter War", and he is quickly shown to be arrogant and bratty. He speaks with a high-level vocabulary, and he is quick to insult anyone he thinks is inferior to himself in intelligence, which is everyone. He is very particular about not being referred to as a puppet; he prefers the term marionette. Although Pinocchio considers himself to be growing up internally due to his heightened intelligence, it is clear to many characters who are quick to point out that he still behaves rather immature like a child, and his mindset on what is means to be an adult is warped in the same way a regular child’s view is. When Geppetto himself stands up to Pinocchio during one of his tantrums, he quickly tells Pinocchio that, judging by his behavior, he truly does not understand what it means to grow up, much to the former puppet’s humiliation. He continued to act like a brat throughout the rest of the series due to his and Geppetto’s fight, but he finally starts to lean the true values of adulthood when Geppetto dies in the war with the Scarlet Hand, growing a more mature and calm personality afterwards. It is from this development that he finally gets his wish to grow up.

He joined the Scarlet Hand after he was promised that the Master would grant him his wish - that Pinocchio would be able to grow into a man.

He has the ability to carve marionettes that come to life.

He showed hostility towards many of his former colleagues and had very little trouble with behaving arrogantly, but he had a close relaltionship with Geppetto. However, when Geppetto confronts his Pinocchio for his betrayal, the older man angrily points out the immaturity in Pinocchio’s actions and character by effectively grounding him, before reminding the humiliated boy that he still has a lot of inner growing up to do. This results in Pinocchio and his father’s formerly close relationship to deteriorate, with Pinocchio still behaving immaturely against Geppetto’s newfound dominance and Geppetto growing annoyed with Pinocchio’s brattiness. It is unknown if their conflict was resolved by the time the Scarlet Hand killed Geppetto, although the boy was clearly distraught by Geppetto’s death, showing he still deeply cared about his father.

It was at this time that he joined the Grimms and started to feel a grudge against the alliance he had once been in.

Pinocchio is described as a small boy no older than Daphne, about 8 years old.

He wears a yellow hat with a quail feather, a pair of red overall shorts and a button-down shirt. His face is angular with a pointy nose and he has a pronounced overbite.

He is described as "hot" by Daphne in one of the prologues of "The Council of Mirrors". It is assumed that he grew up at long last in the end. 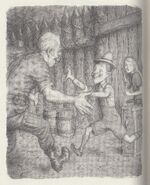 The Inside Story
Community content is available under CC-BY-SA unless otherwise noted.
Advertisement