The Sisters Grimm Wiki
Register
Don't have an account?
Sign In
Advertisement
in: Characters, Everafters, Fairy,
and 3 more

Moth is an Everafter fairy who lives in the kingdom of Faerie, part of the royal Faerie household which earns her the title of 'Princess'. She is the handmaid of Titania and was betrothed to Puck before his banishment by Oberon.  She is an Everafter documented in William Shakespeare's A Midsummer's Night Dream, though she is not a prominent figure in the play.

Moth is part of the kingdom of Faerie as a member of Queen Titania's party. Along with the rest of Faerie, she came over to America from Europe with Wilhelm Grimm, alongside a mass of Everafters. However, unlike most of the Everafters, Faerie decided to situate themselves in New York, establishing the kingdom underneath Central Park. Moth made herself at home with the new Faerie kingdom, dreaming of Queendom as her betrothal to Puck is announced, 190 years after the move to New York. As Moth plans her reign with Puck (whom she is infatuated with), he refuses to marry her, even accepting banishment from the kingdom which he was supposed to rule.

Moth, heartbroken over her loss, believes Puck will soon return as he loves her and as she is entitled to be Queen, convinced that his refusal was only a temporary mistake on his part. And so, 10 years later (Once Upon a Crime), Moth is elated when Puck returns to Faerie albeit in an incredibly bad state and with the Grimms in tow. After Titania begs and pleads with her angered husband to let her son be healed, Moth starts to plan frantically, knowing that Oberon has said that Puck had no place in Faerie and so intends to kick him out as soon as his son is healed. At the presentation party of Veronica Grimm's daughters, Moth slips poison into Oberon's chalice and serves him his drink, fully aware that the king's loyal servant Cobweb would be implicated.

After Oberon dies, Moth runs out of room, screaming and crying that the King is dead. In the resulting chaos, A Scarlet Hand-print is found and the Grimms are chased out of the Golden Egg only for Sabrina and Canis to return to look for Puck. They find Puck but not as expected - he is in a giant, stinking cocoon that Moth is guarding vehemently. Canis semi-transforms into the Wolf and punches a hole into the wall, urging everyone out. Moth forbids everyone from touching Puck's cocoon and reveals that she is his betrothed, much to everyone's surprise. Soon Mustardseed appears and forbids the Grimms from leaving until Puck is healed, instructing Moth to be with them at all times - something Sabrina is not too happy about.

As the Grimms trudge through . Moth notices that Sabrina has some kind of affection for Puck, which does not bode well with the princess at all. This suspicion is reinforced by Puck's cocoon spraying Sabrina, choosing her to be it's protector which makes Moth furious, raging that it is an honour that only belongs between two people in love and two people who trust each other the most. Eventually, Moth confronts Sabrina (publicly) when the Grimms have stopped to eat, telling the angered young Grimm that she has no place to dally with Puck.

As Moth's plans unravel after Cobweb dies saying he didn't kill his King, she starts to plan Sabrina's demise, believing that Sabrina stands in-between her and Puck. As the Grimms go to inform Titania that Cobweb was not the killer and that the true killer can be found out after a visit to Ebenezer Scrooge, Moth makes up enough poison to kill the Grimm family, Mustardseed and the Queen do her path to the throne is clear. Luring Sabrina to the room where Puck's cocoon is locked in a cage, Moth pours Sabrina a drink as the Grimm says good-bye to Puck, and thanks him for one particular moment. Sabrina takes a drink from the chalice, unaware that it is poisoned. She falls to her knees as the poison spreads through her body and so Moth starts to reveal her tale: Puck had returned to Faerie after all these years and there was no way that she would allow Oberon to banish him again as Moth and Puck were meant to rule. She had even planned out the extent of her kingdom, outlining her intentions to expand Faeries and assert Faerie dominance over the rest of New York.

However, her triumphant rant is interrupted by Puck, bursting free from his cocoon as he races towards a dying Sabrina, swinging the Grimm in his arms as he brushes aside Moth's feeble attempts to explain her innocence. He instructs his pixies to retain the princess as he rushes Sabrina to his mother. Moth eventually confesses to her crimes and stands awaiting trial, though she denies any involvement with the Scarlet Hand. Her engagement to Puck is broken and her hopes of sitting on the Faerie throne are no more.

Moth had an air of heightened entitlement, acting as though everyone is her inferior as she is a princess. This leads her to constantly insult and belittle people, particularly those who demand something from her that is not befitting of royalty. She is obsessive and posseses a mean determination - one that leads her to commit murder.

Moth has the appearance of a pretty eleven-year-old girl though she is a few thousand years old. She is described as having beautiful long hair and wears an odd pastel dress that seems to be made out of cobwebs. Sabrina observes that she could almost be pretty were it not for the constant haughty look on her face that arises from her highly arched eye-brows - something that gives her the look of constant surprise. A chapter-head illustration shows that she is bare-footed and her hair and eye color are never specified within the story, but one illustration shows her with blonde hair and a heart-shaped face. 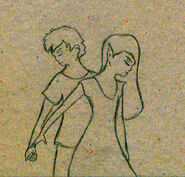