Jack Englishman, also known as "Jack the Giant Killer" or more simply as "Jack", is the star of his fairy tale, Jack and the Beanstalk. Jack made his first and only appearance in "The Fairy-Tale Detectives", though in "The Everafter War", his apartment was mentioned briefly as being monitored by the Scarlet Hand. Jack is an example of an Everafter that seems like a protagonist in his or her fairy tale but is actually a villain in Ferryport Landing. Jack betrays the Grimms and is a zealous member of the Scarlet Hand.

Jack is noted to have spiky blonde hair, and bright blue eyes. He also has a rather round, boyish face and a button nose, and when the Grimm sisters found him, he was in desperate need of a shave. He seems to have a tendency to gamble, losing priceless magical artefacts in poker games. He has a prominent English accent, which provides a key clue as to who the antagonist could be in the conclusion of The Fairy-Tale Detectives and is very skilled in archery. He joined the Scarlet Hand, though we don't know when.

In "The Fairy-Tale Detectives", Mirror told Sabrina and Daphne to visit Jack the giant killer to help find Relda, who was kidnapped by a giant. Jack promises to help them if they bust him out of jail which they do, followed by an intense police chase on the magic carpet. He then proceeds to rile up Puck and sleeps on the Grimm couch, annoying Sabrina and Daphne who just want to save Relda and Mr.Canis. After Sabrina threatens to phone the police, he reveals his plan to get the Grimm girls to infiltrate the Ferryport Landing Ball and then go to Charming's office to find maps that would lead to the location of Relda and Canis.

After infiltrating the ball, nearly getting shot by Charming and finding out that he is, in fact, the good guy, the Grimm sisters find out that he is the 'Englishman' that is behind the entire plot and that Jack never really wanted to help them and just made their "Giant" problem bigger. After receiving a phone call from the local press, the Grimms and Charming find out that Jack intends to lead the giant up to Widow's Peak and has invited the press to see the spectacle. He also stole the magic beans to unleash more giants into the world in case his fame died down; a form of insurance that would allow him slay another giant if needs be. They arrive at the Peak using Dorothy's Slippers, Charming panicking as this was what he wanted the least - to gain attention to the Everafter community through the press. He is soon knocked out after he deflected the burning arrows that Jack shot at him with Excalibur.

After a chase through the forest and Sabrina unintentionally killing the Giant with Excalibur, Jack is livid as he wanted to kill the giant to earn himself fame. While fighting in the forest, Sabrina notices the sign of the Scarlet Hand (a red hand-print) on his shirt and recognises it as the same sign that was stamped on their parents car after they had vanished. He goes to kil the Grimms but is stopped by Granny Relda and Mr. Canis, who soon changes into the Big Bad Wolf to protect the family. Jack starts a fight with the beast with the idea that the Everafters in the town would call him 'Jack the Legend Killer' after he slew the wolf. However, Puck's pixies arrive and help overpower the Everafter; as they go to get the jar of beans that Jack stole, it shatters and beanstalks sprout out from the land. Hundreds of giants come down and fume over their dead brothers body. A terrified Jack points to Sabrina, saying she killed him but the giants don't believe a child could have killed their sibling. They take Jack to answer for his crimes in front of the Queen of Giants - Jack pleads to Relda to help him but she replies that she cannot deny the giants their mercy after he has killed so many of them. Jack then manically laughs and says that the Scarlet Hand are coming for them and that the Grimms days are numbered - who did they think had Veronica and Henry? He is then taken up to the Giant Kingdom and never heard of again.

Jack's story in series end with two questions being brought out of his story - who are the Scarlet Hand and how did Jack get the bean that was safely locked away in the Grimm Family Home?

Jack is a charming Englishman, who comes across as witty, arrogant and slightly roguish. However, he is essentially addicted to fame and the attention it brings and is willing to resort to any lengths to get this attention. He commits extreme actions but is unwilling to face up to the consequences, thus proving him to be a coward in actuality. 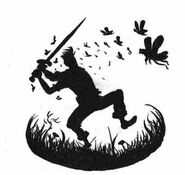