Henry "Hank" Grimm is the father of Sabrina, Daphne, and Basil Jr.. From books 1-6, as well as the first few scenes in chapter 1 of book 7, he was under a sleeping spell caused by the Scarlet Hand.

Henry "Hank" Grimm is a descendant of the famous Brothers Grimm. His parents are Relda and Basil Grimm, and he has a brother, Jake .

The death of his father changed Henry dramatically. He gained a distrust to all magic and Everafters, much like his daughter Sabrina. He and his wife were betrayed by the Wizard of Oz and kidnapped by Scarlet Hand. Both were put in a sleeping spell. Throughout the series, his family tries everything they can to awaken him and finally succeed in book 7.

“I was around Daphne's age when my father opened the Hall of Wonders and its contents to your uncle and me...Dad thought it was good for us to know how to use magic...we didn't take magic seriously.”
~ Henry Grimm to Sabrina, from {{{3}}}

At a young age, Henry and his brother were introduced to magic and "saw it as a little game." When Hank was 18 years old, Jacob temporarily shut down Ferryport's magic barrier so Henry's girlfriend, Goldilocks, an Everafter, could be free. Unfortunately, this also freed the Jabberwocky from its prison. The monster killed Basil Grimm and "changed his sons forever." Henry ended his relationship with Goldilocks and moved to New York City right after Basil's funeral. There, he fell in love with Veronica, who he married and moved back to Ferryport Landing with, where she was introduced to the Grimm family business. However, when his wife became pregnant with Sabrina, Henry left Ferryport Landing, believing that it was too dangerous a place for his child. He raised his family in New York City for about a decade, determined never to get mixed up in Everafters again.

When Sabrina and Daphne were nine and five respectively, Henry and Veronica were kidnapped by the Scarlet Hand, though the girls did not know that yet. The only trace of their kidnapping was a red handprint on the windshield of the car. Their parents were announced dead, sending Sabrina and Daphne were sent to orphanages. Unknown to the Grimms, Henry and his wife were put under a sleeping spell and put under the watch of Red Riding Hood.

Henry and Veronica are only mentioned in book 1, but even then were an important part of the plot, as their family tried hard to find them.

In book 2, Henry and his wife also remain behind the scenes. However, it is worthy to mention that Sabrina was desperate to find them. Every night she hunted through books for anything that could help her find Henry and Veronica and tested her findings in the Hall of Wonders with keys she stole from Granny Relda.

It was almost holiday time, and without her parents, Sabrina suffered, especially that she had to deal with middle school. She suspected all Everafters in the plot of her parent's kidnapping and had constant angst. Her anger fed the power of Rumplestiltskin, who disguised as her school counselor. This power feuled an explosion that destroyed the school with Mr. Canis inside it. When she saw the victims of Rumplestiltskin croon over their long-lost children, Sabrina felt as though she needed her parents at that moment. With a match from the Matchstick girl, Sabrina wished for a portal to her parents and finds them in their sleeping spell in an old asylum. Red Riding Hood was there as well, and her Jabberwocky knocks Sabrina unconscious, ending the second book in a cliffhanger.

In book 3, Henry and Veronica were shown in the very beginning where the last book left off: in an abandoned asylum. Sabrina finally met their captor: Little Red Riding Hood. Riding Hood was also paired with the Jabberwocky, which she called her "Kitty." Unfortunately, Red fled the old asylum with Sabrina's parents.

The death of Henry's father was revealed later in the book when Jacob Grimm, Sabrina and Daphne's long-lost uncle, arrived at Ferryport Landing.

Henry and his wife were shown again in the book after the Jabberwocky was slain. But for Jake, it wasn't enough. He gained the powers of the Blue Fairy to grant his own family's wishes. For Daphne, Jake brought Henry and Veronica, awake and safe. However, the price was the death of all Everafters. Sabrina did the right thing by wishing that Jake "knew how much power" he already had. Thus, everything after the killing of the Jabberwocky was undone, and all the Everafters were safe. Red Riding Hood was much less dangerous without her "kitty," however, she revealed that she was not the leader of the Scarlet Hand. The Grimms rescued Henry and Veronica. However, they didn't know how to get them out of their sleeping spell at that time.

Book 4: Once Upon a Crime

In book 4, Sabrina and Daphne returned to New York City, the home of their family before their parents were abducted. Hank was mentioned little in this book. However, book 4 does reveal the secrecy of Veronica Grimm, his wife. Veronica, without telling her husband, aided the Everafters living in New York City, feeling that it was her duty as a Grimm. It also uncovers the treachery of the previous Wizard of Oz. Oz is a worker for the Scarlet Hand and was the reason Henry and Veronica were kidnapped.

While most of his family was in New York City, the sleeping Henry and Veronica were guarded by Jake Grimm, who fed Elvis sausages, not knowing that the dog got quite gassy after this favorite treat.

Book 5: Magic and Other Misdemeanors

Henry and Veronica were only seen in this book when their daughters traveled into the future. Fifteen years into the future, Henry and his wife was still asleep, as their family couldn't find a cure.

At the end, the Grimms finally find the cure to wake up Henry and Veronica: Hank's old girlfriend, Goldilocks. With her kiss, Hank may awaken.

Finally, the Grimms contacted Goldilocks and, since she loved Henry, awoke him with True Love's Kiss. With the same method, Henry woke up Veronica. With the house under siege, his family escaped to Charming's Camp.

Meanwhile, his wife and his daughters found out that Veronica was pregnant before her abduction. It was proven that she is no longer expectant, meaning that her child was stolen. Veronica and the girls kept it a secret from Hank because they feared he would become even more hostile to Everafters. In the same book, Daphne, Sabrina, and Puck discovered that Mirror is the Master of the Scarlet Hand and that he was planning to steal the infant's body to escape the barrier.

Henry seems to dislike Puck immediately, and the two become enemies automatically when Henry mistakes Puck as Peter Pan and Puck ruins the car. Henry is mostly being protective of Sabrina, and he thinks that Puck is a bad influence. He turns red and stammers everytime Puck (seemingly on purpose) pops the puberty question.

Book 8: The Inside Story

Sabrina, Daphne, and Puck followed Mirror into the Book of Everafter to save Hank's son. Eventually, Granny Relda, Veronica, and Henry find each other in the book and Henry discovered he was a father to a son. They find Mirror and take back the boy. Unfortunately, to do this, Granny Relda had to sacrifice her own body to Mirror. Once the family exits the book, Henry names his son after his father, Basil.

Book 9: The Council of Mirrors

Henry is still reluctant about staying in Ferryport Landing and he's very protective of the girls. Henry's true training comes out when fighting the Grendel, and he proves himself to be quite the warrior. Henry and Puck, though they have their differences, seem to get along beter. Henry recognizes the crush between the two, and even though he may not completly approve he doesn't interfere. Henry is strong with his brother and helps pull Jake out of the swamps of depression after Briar dies.

Sabrina had a fairly close relationship with her father, though she was surprised by what she learnt about him and his life. She was firstly bitter towards her father (and mother) as she was under the impression that the two had abandoned her and her sister. After finding out the truth behind their abduction, she spends the next few books doing everything she can to find her parents. After eventually finding them in their sleeping state, she frequently used to sleep by their side, missing them badly. Sabrina is described as having her father's blue eyes and blonde hair. He wasn't too happy when he woke up to find his daughters in the thick of battle and also involved with Everafters, which led to him having a strained relationship with the two opn waking. Eventually, after talking with Sabrina, he allowed them to stay, though he again tried to take them out of Ferryport Landing when the prophecy in The Council of Mirrors states taht his daughters can defeat the Scaret Hand. He later accepts that Sabrina and Daphne are more grown up than he gives them credit for, and that they have been through more than he can understand. He also remains incredulous at the relationship between Puck and Sabrina.

“Hank was always the high-strung one. He can be very stubborn, too, but your dad is only trying to protect you both...He gets that from your grandfather.”
~ Jacob Grimm to Sabrina and Daphne, from {{{3}}}

Henry Grimm is very protective of his family. After awakening in Ferryport Landing, he was very on edge because he wanted to get out of the town where is father was killed. Sabrina was surprised by his attitude, thinking that he was always "laid-back" in New York City.

“You told me once you thought your father was too careful, but the Henry Grimm I know threw caution to the wind.”
~ Relda Grimm to Sabrina about Henry, from {{{3}}}

As Granny Relda said, "there are many sides to us all," though Henry may have just changed after the death of his father.

Hank has a warm, round face with blond hair.﻿ His eyes are blue and he and Sabrina look a lot alike. 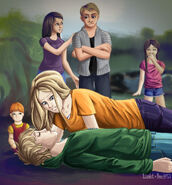 Fanart by Lizalot and Pearl4453 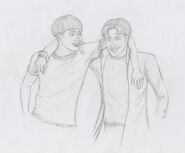 Fanart by Elligoat
Community content is available under CC-BY-SA unless otherwise noted.
Advertisement