The Sisters Grimm Wiki
Register
Don't have an account?
Sign In
Advertisement
in: Characters, Grimm Family, Real-world,
and 2 more

The Brothers Grimm were German linguists best known for their collections of fairy tales. In The Sisters Grimm, they are the ancestors of Sabrina and Daphne and set the tradition among the Grimms to be fairy-tale detectives.

Jacob and Wilhelm Grimm lived during the late 1700s and early 1800s. They studied the German language; a large part of this was recording and documenting popular folk tales. These were put together into a collection called Children's and Household Tales, and comprise a large part of the fairy tales we know today.

Role in the Books

After witnessing the persecution of Everafters in the human community, Wilhelm and his brother Jacob decided to take action. Wilhelm was already friends with a large population of the Everafter community as he documented many of their histories, and so he purchased some land in America with the intention of creating an Everafter settlement. With the Neuer Anfang and other two other ships, Wilhelm set sail to America with his Everafter companions and established the town of Fairyport Landing where the majority of Everafters settled.

Life was relatively peaceful in the town but Wilhelm was not blind to the growing tension between the town's Everafter community and the humans in the neighbouring towns. After foiling an Everafter plot to rid the next town (Cold Springs) of humans, a desperate Wilhelm joined forces with Baba Yaga to cast a spell over the town, creating a barrier that prevents Everafters from leaving the town.

Wilhelm is the ancestor of the American line of Grimms, being the great-great-great-great-great grandfather of Sabrina Grimm and Daphne Grimm. The two sisters met their ancestor in Magic and Other Misdemeanors, when a Time Tear forced the Neuer Anfang and its inhabitants into the present. They successully manage to stop his execution (as the Scarlet Hand want to execute him in order to stop the Grimm line from continuing) and send him back to his time.

Similar to his brother, Jacob Grimm was also an Everafter historian. He stayed in Germany to further carry on his work whilst Wilhelm took a large community of Everafters to America.

William is a popular given name of old Germanic origin.[1] It became very popular in the English language after the Norman conquest of England in 1066,[2] and remained so throughout the Middle Ages and into the modern era. It is sometimes abbreviated "Wm." The name's shortened familiar version in English is Bill, Billy, Will or Willie. A common Irish form is Liam. Female forms are Willa, Willemina, Willamette, Wilma and Wilhelmina.

Jacob is a common male first name and a less well-known surname. From 1999 through 2012, Jacob has been the most popular baby name for boys in the United States.[1] It is a cognate of James. Jacob is derived from Late Latin Iacobus, from Greek Ἰάκωβος Iakobos, from Hebrew יַעֲקֹב (Yaʿqob, Yaʿaqov, Yaʿăqōḇ), the name of the Hebrew patriarch, Jacob son of Isaac and Rebecca. The name comes either from the Hebrew root עקב ʿqb meaning "to follow, to be behind" but also "to supplant, circumvent, assail, overreach", or from the word for "heel", עֲקֵב ʿaqeb.

The Grimms' Characters in the Series 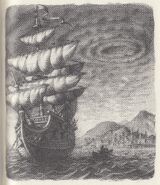 Wilhelm gets arrested by Nottingham in Magic and Other Misdemeanors 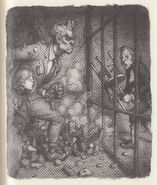 Mr Canis and the girls break Wilhelm out of jail in Magic and Other Misdemeanors
Community content is available under CC-BY-SA unless otherwise noted.
Advertisement